Matching Michigan: what can we learn from Zingerman’s Mail Order and Mercy Health, Muskegon?

Last week my colleague Ann and I, were lucky enough to visit the University of Michigan in Ann Arbor to learn more from Drew Lochler and colleagues about the much lauded ‘Toyota Kata’, first described in the book of the same name by Mike Rother back in 2009. This included two site visits to Zingerman’s Mail Order and Mercy Health in Muskegon, on Lake Michigan. 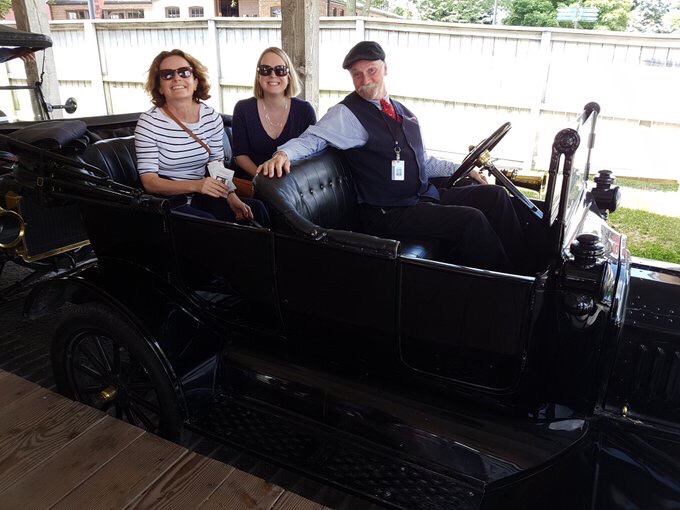 I was a little curious and hugely excited, ‘Kata’ means routine, rather like practice routines such as learning scales on an instrument. The idea of spending a week examining improvement routines with some the best minds in the business was enticing, especially given the focus of my PhD on routines and capability. (I confess to also being a little sceptical, is Toyota Kata yet just another improvement ‘brand’ or ‘fad’, repackaging the old, confusing the masses and generating a new round of books and conferences e.g. Katacon?). After a whirlwind trip to ride in a Model T Ford at the birthplace of mass production in River Rouge, and arguably lean after Toyoda’s visit there to see the moving production line, we arrived bright and breezy at the Barn of the Year 2015 (who knew you could win that?) to start the programme. 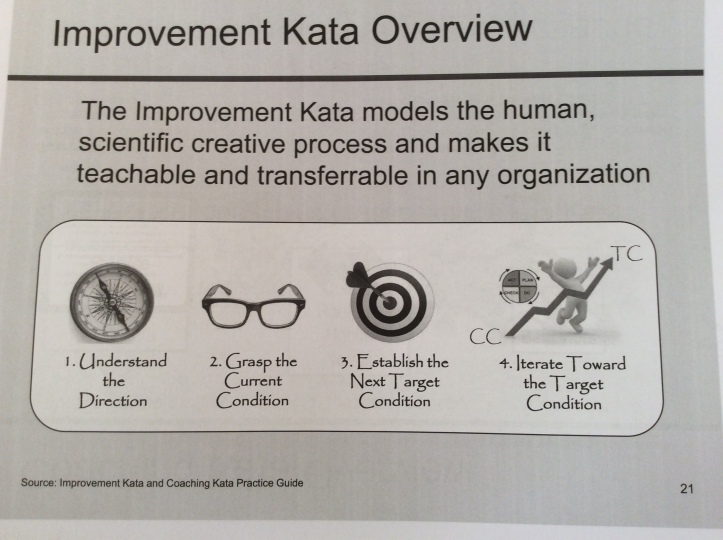 At first the Toyota Kata patterns seem remarkably simple (see above), I mean don’t these questions seem kinda obvious? Drew explained to us how the questions have much in common with A3 thinking and are used in Toyota alongside the more commonly adopted tools and processes such as kanban, 1 piece flow and jidoka. But, he explained, Toyota Kata is the missing link in most improvement efforts who adopt the improvement tools, the purpose pyramids, the value stream analysis, the collaborative etc., yet fail to mimic the improvement and coaching practices to develop people alongside the tools, as these have often been unnoticed elements of Toyota culture. And that these Toyota Kata patterns are critical to success, sustainability and ongoing continuous incremental improvement. Further, he argued Toyota Kata helps to counter the problems created through narrow and deep focussed value stream analysis and rapid improvement event lean deployments that can only ever touch a small number of staff quickly. Teach a man to fish…

So over the first 2 days with the help of a 15 piece child’s jigsaw, a small lanyard with the questions on and a tub of sticklebricks we set out to learn some new improvement routines and habits, our starter Toyota Kata. We were also lucky enough to have a slightly starstuck lunch with Mike Rother to talk Toyota Kata in healthcare. It is fair to say, the Toyota Kata 5 coaching questions are deceptively simple, the art of these questions come both in the ability to agree stretching yet achievable goals and the more specific the better. ‘The best goal (target condition) is one that will make you wanna hurl‘ the wonderful Betty from Zingerman’s Mail Order told us.

Toyota Kata is set up for a Kata learner, a Kata coach and a second Kata coach, typically through a line management chain rather than improvement experts. The process also requires a fair amount of trust and respect for people in line with one of the founding principles of the Toyota Way. Embedded in the Toyota Kata questions is coaching and rapid PDSA aligning with organisational/system goals or True Norths. The questions are designed to help learners to the edge of their threshold of knowledge and just move them to out of their comfort zone whilst being explicit of the purpose and the theory of change. ‘How will you know?‘, being a repeated follow up coaching question, the harder part for coaches being to stay quiet and not suggest (or worse) impose solutions.

In the second two days, we saw Toyota Kata being used to solve challenges alongside more established lean practices at Zingerman’s Mail Order, and Mercy Health. At Zingerman’s Mail Order most redesign work and implementation of takt, flow cells, visual management etc, had been implemented. Toyota Kata was being used by staff at key problem areas, revealed by these improvement tools, to ready for peak demand at Christmas, regularly. At Mercy Health, the mission control / big room (Obeya room) was set up to use the Toyota Kata during the executive meetings and an open Toyota Kata challenge was being used to improve the meeting itself. In that meeting the CEO acted as the Kata learner, coached by a member of the improvement team, in front of his senior leadership team. Talk about CEO role modelling and displaying leadership vulnerability. 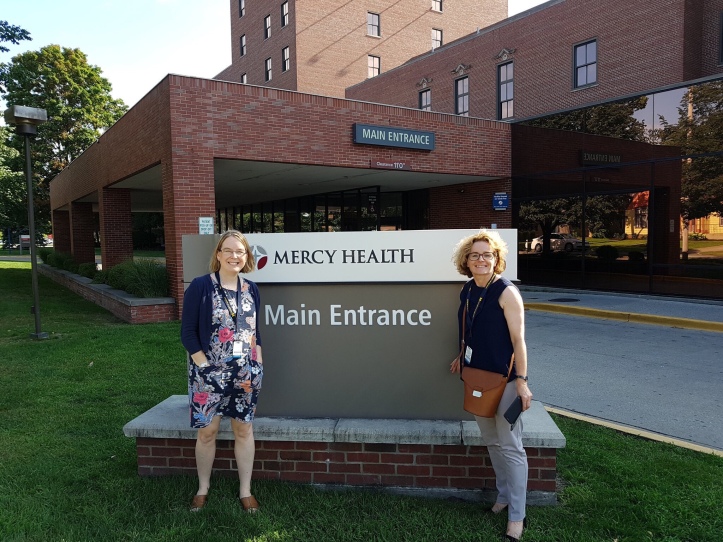 We were lucky enough to observe several open Toyota Kata challenges in ‘lanes’ at Mercy Health in Muskegon, ranging from infection control, LoS reduction and car parking. And Maurene and colleagues at Mercy Health ensured we got some more practice in encouraging us to be a Kata coach on 2 occasions. In all cases the strength of making the Toyota Kata explicit and part of the improvement process was tangible and emotional. We observed staff share their challenge, data (often local and manually collected) and saw PDSA frustration, success and explicit learning. We also observed explicit verbal contracting between the Toyots Kata learner and their Kata coach to ensure their next step would be reviewed, often in the next couple of days. I’d like to blame it on the jet lag, but Ann and I often felt moved to tears with the pride in the work, and the clear, and measurable, patient benefit.

For me, I was particularly interested in how to bring together traditional ‘event’ based lean deployment with the Toyota Kata routines. Mercy Health in Muskegon had done this in two main ways. 1) through concurrent implementation to spread in areas without large event based improvement work, instead building on the enthusiasm and existing improvement work in the teams and 2) incorporating Toyota Kata into improvement events in-week as rapid experiments and then throughout the 30-60-90 follow up process, largely eliminating the need for post-hoc facilitator reviews.

Indeed their ‘meta-Kata’ work on improvement practices and routines demonstrated the benefits of this approach through improved sustainability and reduced facilitator time needed, especially for data collection. In fact, Mercy Health in Muskegon, are now spreading Toyota Kata and see reduced need for improvement events as the practice of regular and locally coached improvement practice (Toyota Kata) spreads. That is not to say that rapid improvement events are not without value, they too provide a whole system and team base perspective and are arguably quicker, ensuring change and important learning for Toyota Kata to build on whilst the slower to master Toyota Kata coaching and improvement routines develop. ‘Go slow, to go fast; develop your people, to develop your processes‘.

Is Toyota Kata a fad? I didn’t get that impression. Does Toyota Kata seem worth it? In Michigan, it certainly appeared so.

So what does that mean for me? How can we match Michigan in their use of Toyota Kata? What did I learn? 3 main things: 1) I will have to unlearn some improvement habits whilst I learn new Toyota Kata habits, (probably painfully). 2) Improvement events, workshops, collaboratives etc. have their place, yet Toyota Kata is arguably more able to take context into account and is more engaging, accessible, successful and sustainable. And 3) many of our assumptions of what staff need to know about improvement as part of induction and beginner programmes e.g. run charts, 5S, driver diagrams, etc., may possibly be completely flawed. These 3 areas will undoubtedly also be some of my obstacles going forwards.

What I noticed was that Toyota Kata learners and coaches can use the starter Toyata Kata patterns almost immediately without any QI/Improvement training. Improvement expertise can be shared by coaches on a need to know basis when a Toyota Kata learner is at their threshold of knowledge in a PDSA cycle rather than batched in a training programme (thus also making the arguments about which improvement method is best, utterly pointless, if they weren’t already). This for me is significant in healthcare, with the inexorable rise in QI/Improvement training, certification and academies, and associated costs and waste. Toyota Kata ensures skills and improvement capability, (as a bundle of routines), is developed through practice, within the local context. Just like with karate forms, mastering the routines is critical and people development the goal, wherever they start, rather than through training per se.

So, what’s my next step? I’m so excited, it is hard to think of only 1 out of all of the possibilities. But following the Toyota Kata principle of 1 problem at a time, my next step is to: identify 1 learner and 1 coach to use this concurrently in my value stream analysis next week in Lancashire (coach, is that specific enough?). What do I expect? That it demonstrates a new way to enact improvement actions as part of the event and the two participants will also find it useful (I hope).

Finally, as Zingerman’s Mail Order would say, appreciation: thank you sooooooo much to all who shared time, learning and their coaching expertise with us on our trip, especially Drew, Sam, Toni, Mike, Betty, Maurene, and many more, and also to Dianne for sorting all the arrangements! Special thanks also to my mum and dad for looking after my kids for me during the school holidays, facilitating my travel.

Hope to keep learning with you all going forwards.

Since your here, I would be so grateful if you would consider supporting my daughter Hannah in her World Challenge fundraising. She will be volunteering and supporting community healthcare and education projects in Eswatini (Swaziland).  Thank you.

Every time you shop, you’ll raise a free donation for World challenge eSwatini 2021 -Hannah Furnival every time, it’s that easy!